Venue Port Street Beer House, the event Magic Rock Brewery in attendance for a Meet The Brewer session and to launch their new Imperial Stout, “Bearded Lady” which was brewed in collaboration with the guys from Port Street themselves. Excited? Muchly… 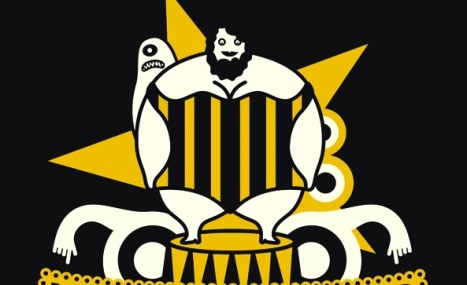 I’d been to a meet the brewer night with the guys from Magic Rock before, it was earlier this year at North Bar in Leeds, that was a really enjoyable night too but a lot of beer has passed over the bars of Britain since then and Magic Rock have been busy…

The night opened with a complimentary half of Curious their regular easy session drinking Pale Ale, bold but somewhat delicate flavours and served to thirst quenching perfection. Trademark hop aromas filling the air as the expectant buzz of eager brewers, bloggers and drinkers with an eye for something different gathered around the bar, before Rich and Stuart took centre stage.

What is great about these guys is their obvious passion for what they do, there’s no standard corporate brewing spiel, they speak from the heart and have no problem about laughing at themselves when the talking doesn’t quite go as planned. 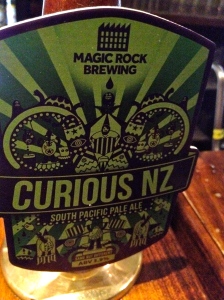 They explain how and why they started brewing Magic Rock beer, which was to brew the sort of beer they wanted to drink, beers and styles they enjoyed and not be tied to convention.

The first beer is then introduced, it’s Curious again, but now with a New Zealand twist Curious NZ. “It’s Curious but different” the tasting notes say and there’s no BS here either from the brewers. Basically brewed as an alternative to standard Curious but with New Zealand hops to preserve the diminishing stocks of those normally used from the USA. It tastes very different I’d say having a much sharper hop bitterness, really enjoyable and a real stand out pump clip on the bar too. An experiment that I’m in no doubt will return again and again, a sure fire winner.

We moved on then to High Wire, Magic Rock’s West Coast Pale Ale, “version keg”. If there 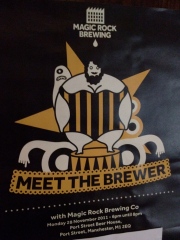 was one beer from Magic Rock that I’d like to see permanently on the bar of my local it would be this and using the same dispense method, (forget what Kevin thinks).

It was served chilly cool, instantly refreshing and I think lost nothing for being so. The flavours just leapt out and the aromas filled the room with the scent of hoppy goodness. Imagine drinking that on a warm summers evening BOOM, perfection…

Fourth beer up was Dark Arts the Surreal Stout, rich roasty indulgient goodness with Magic Rock hoppy slant, you get all the chocolate, coffee, liquorice flavours you’d expect but there’s still great hop character going on too, really complex beautiful beer. For a brewer who claims not to like stout, you’d never know it from tasting this, you’d never believe it either from the way he sogged his sample down too! 😉

Finally the time had arrived for my hot date, The Bearded Lady was in town and she meant business. “Powerful, robust, intriguing; yet decadently smooth and sumptuous, the lady demands respect…” Based on the Dark Arts recipe and brewed with the help of the folks from Port Street it’s one BIG beer. Imagine Dark Arts, but on steroids, pumped like Arnie, a Terminator Stout! The thing is though it’s surprisingly drinkable, it takes all the Dark Arts flavours you know and love and boosts them big time, but the hops are boosted too so everything just balances out, I liked it, I liked it a lot, great work guys. 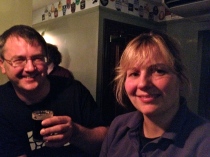 Sharing a table with Michelle and Paul from "Off Beat Brewery"

Before we knew it Meet The Brewer was over, beers sampled, explanations given and heartily discussed by some very happy customers. My friend commented that it was the most enjoyable event of it’s type he’d ever been to and he’s been to a few… Echoing my sentiments about the candid open approach to the whole thing, sitting casually on the bar, no airs and graces just chatting really.

One other thing stood out too, it was the amount of younger looking faces in the room which is really exciting because those faces are here for one thing and that is good beer, new beer, exciting beer in fantastic surroundings. I’m not sure if that’s down to Magic Rock, Port Street or a combination of both but it bodes well for the future. Get these people into fantastic beers and hopefully we’ll see a Port Street in every city, town or high street. YES PLEASE!!

I can’t finish without congratulating Port Street themselves on what was a superb range of beers over and above the Magic Rock range. Summer Wine Brewery’s Cossack, the Kernel-Thornbridge collaboration, Burton Ale, Great Divide Yeti and my highlight of the night, De Molen Vuur & Vlam to name but a few. Outstanding!

Don’t forget too that you get a second stab at meeting Magic Rock this week if you can get yourself down to The Grove In Huddersfield tomorrow night, another great venue and another new beer being launched Rock Star.

Rock Star is a collaboration with Dark Star Brewery and looks set to be a cracker, sadly no further pass out for me but I’m sure there will be plant of very lucky folks who can make it, good luck everyone involved, from a slightly jealous Stoke blogger… 😉

4 thoughts on “A date with a Bearded Lady”