If you are a beer fan or a Twitter user you simply must know that last night (Weds 8th February 2012) was White Stout night, where across the UK and perhaps beyond, beer lovers opened their shiny bottles of White Stout in unison and shared the beery love. I was one of those many and had gone a step further in organising a mini gathering for a tasting session and to try a bit of cheese/beer pairing.

So why did I get involved to such an extent, when I’d not ever tasted a Durham Brewery beer before never mind the White Stout as the new kid on the block?

Three reasons really, one, I’d been involved in similar Twitter events before like #openit (next one is 24-26 Feb 2012) and #7point5 and really enjoyed them, great interaction with other folks is a great way to experience and learn about beer. Two, I’d been watching Elly from Durham Brewery‘s tweets about #whitestout and was drawn in by her bubbly enthusiasm about her brewery’s beer. Finally three, it was giving me the opportunity for the first time to host a little tasting session with food pairing, a thing I’d been itching to get going in Stoke for a good while, I’d moaned about it long enough, time to roll up the sleeves and get stuck in.

I was to hold my #whitestout session at my local The Bulls Head, where I’d arranged for a few fellow beer lovers to gather together on a week night when the pub would normally be pretty quiet. As I only had one beer to draw them out on a cold winters night i decided to pad the night out with some cheese pairings to try. I enlisted help from trusty twitterfolks Rick Furzer and Steve Lamond who have experience in this area plus thoughts from Elly at the brewery, so armed with their suggestions I hot footed it up to my local deli Brown and Green.

Andy (as pictured above) was an absolute star, although he didn’t have everything on my shopping list he was fantastically enthusiastic about finding alternatives, things that would work or that people would just simply enjoy. He busily cut away at various cheeses, we’d sample a hunk of this and a chunk of that before narrowing it down to a final four. 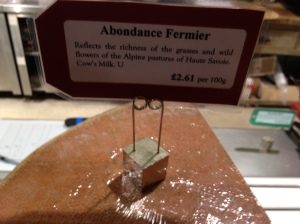 Wednesday afternoon came and I set about getting things started, I had deliveries to make to a few local brewers, pub and marketing folk that couldn’t make it, my tasting beers too to their cellar to cool and cheese to chop, this done I set off to The Bulls Head.

Arriving later than I’d hoped I have to confess it was a little chaotic, people arrived and wanted to get straight into their White Stout before drinking any other ales. I scrambled with help from the bar folk to get glasses sorted and beers poured. BOOM disaster, one of my white stouts was decidedly dark. In my haste I’d opened a bottle of their 10% Imperial Stout “Temptation” and started to pour it into a half filled glass of white, a mistake which turned out to be a really interesting combination as it rocked. A mistake that Ghostdrinker made purposely in his tasting session funnily enough to similar happy results.

Drinks served we all tucked in,    silence…

Even I was quiet (for a while), deep in thought, I’d not tasted this before either and it was well, different. The looks around the room were worrying, pensive faces not WOW faces I’d say, yes it was good but did it live up to the hype, probably not in that moment. I quickly jumped in to say it was probably too cold and the flavours were stifled. The beers had not been chilled apart from in a cellar environment but this definitely was the case.

As the glass warmed and time wore on those pensive faces stared to have smiles and soon busy chatter started and phones came from pockets to tweet their thoughts. We cracked the cheeses and started to tuck in and sample one against the other. I was so glad that we’d enough beer for seconds as it was a revelation with the second batch that had sat in a warm room for a while, great beer in great condition.

On the cheese pairings there were mixed reviews, all four cheeses were fantastic in their own right. The Y Fenni didn’t pair well but being fair it wasn’t meant too, Andy and I had picked it as a great eating cheese, it’s made with wholegrain mustard and ale which just seemed right for the occasion, it was and was popular. So too was the Godminster Vintage Cheddar, probably too good in fact as before I knew it the gannets had wolfed the lot and I didn’t even get to try any…

For me though, the cheesy stars of the show were the Abdomnance Fermier and the Dovedale Blue. Abdomnance Fermier was as a replacement for aged Gouda as suggested by Rick, it has a deep nutty flavour, slight sweetness and a nice firm texture. Dovedale Blue was a twist on the Stilton or a soft blue as recommended by Steve and Elly. I really enjoyed this one and for me it was the winner by a cheese wire of margins, soft, rich and very creamy which really went well with the sweetness of the stout, but it had a nice acidity and saltiness from the blue veining which brought the whole thing together, marvelous. In truth I’d recommend any of them to try but these two for this beer. 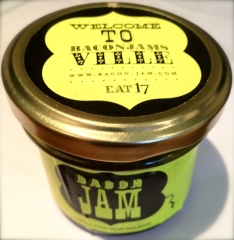 Conscious that I haven’t mentioned the bacon jam, I will, you’re intrigued aren’t you admit it?

I was too as Andy rushed to a chiller at the back of the cheese counter and produced it. It had similar results when I presented it to my astonished/repulsed guests “BACON JAM”!  This stuff is ace, I can only describe it as a sort of minced bacon chutney, loads of bacon texture in a rich sweet, spicy paste-like sauce. Everyone tried it tentatively at first before diving back in for more and more. Personally I loved this with the Abdomnance Fermier, but apparently it’s designed as a relish on crusty bread, burgers etc, also for adding to stews, pasta dishes as well as a side for cheese. I’m thinking spread on bread before toasting a vintage cheddar on top..hmmm.

OK to round-up what would I do again next time around if the chance arose. More beer in terms of more variety and some that I had tasted before to add value as a host rather than being one of the crowd. Venue, the pub was great and I thank them heartily but thee was no wi-fi and general phone reception is awful (for me at least), thankfully the pub is due wi-fi in a few weeks time (box ticked). More cheese pairings definitely and more quantity, I’d love to expand the food into other things too like sweets and savoury dishes as Leigh, Zac and co are doing up at Beer-Ritz. Minor things and easily rectified.

So why small acorns? (NO PUNS REQUIRED IF YOU PLEASE ;)) 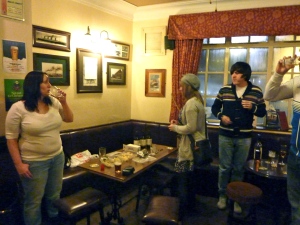 Well this all started from a small acorn of an idea by I assume Elly Bell at Durham Brewery, it grew into a massive oak tree of an event joined by thousands across the UK and I’m sure was a resounding success. Twitter was full of the #whitestout hash tag and I’m sure would have trended had it not been for a certain Italian ex England footbal manager

But also it was a small acorn for me too, the start of something I’d like to grow here in my area. I said earlier I do enough moaning about it, get stuck in and get it moving, hopefully this did just that.

Thanks to everyone who attended, assisted, joined in and hopefully enjoyed, particularly you Elly at Durham Brewery you’re a star.

See you all on the next one, CHEERS

A time to reflect on the nights events with Jim & I finally giving in to temptation.

8 thoughts on “Small acorns and all that.. #WHITESTOUT”