Over the past year I’ve had the privilege to be involved in some great Twitter beer related events. We’ve had #openit, the #whitestout night and the #7point5 campaign night to name but a few. They are a really enjoyable and most importantly, are a very effective way of getting lots of people talking about a common theme or message regardless of location. 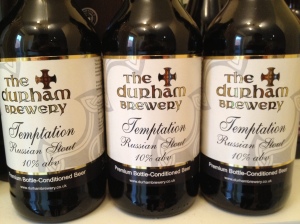 Next up is #IMPOFF, brainchild of the ever effervescent Elly Bell of Durham Brewery and brought to life by various twitter folks including Simon at CAMRGB, myself and several other beery types.

The basic idea is that if possible you get yourself a bottle of Durham Brewery’s Temptation to start with, the reason being that the whole thing began with Elly suggesting that Temptation would stand up to or generally be superior to most imperial stouts out there in the market place today. Bold claims huh? 😉

In all seriousness though it was all tongue in cheek and not boastful. Elly is passionate about her breweries beers and quite rightly so, they are top dollar. The main premise was to follow-up on the massive success of White Stout night and get people to check out Temptation, whilst comparing it to those on an initially “suggested” list all being available from Beerritz online to make it easy for folk to buy them all in one place. That list is below:

That list is by no means full and comprehensive nor is it meant to be restrictive, these are suggestions only so get involved by drinking what you have, what you can get hold of, or even what you are comfortable with. After all these are BIG beers and obviously too much to handle for one person in one night. It doesn’t even matter if you can’t get any Temptation to compare yours with just join in anyway and lets get folks talking about Imperial Stouts… Don’t forget to use the #IMPOFF hash-tag.

I’m planning another mini get together tasting session for my #IMPOFF night, on a smaller scale than my last with four to six lucky imperial stout loving guests. On the night we will be comparing the merits of all or a selection of these fabulous beers:

That’s the plan anyway which may change dependant on how I arrange the tasting on the day. Official kick off time is below but again this is not restrictive if it doesn’t fit with your plans on the day, do it before, during or after, just do it and enjoy…. 🙂

Note: If you are a beer specialist, bar, shop, beer retailer or a pub etc and are running an #IMPOFF Imperial Stout night yourself and want it advertising here, drop me a response on the blog with the details, links etc and I’ll do the honours. Please pass this on, RT, Facebook, email whatever and help make this another great night for beer.

4 thoughts on “Clash of the Titans – #IMPOFF”