Several weeks ago I announced/suggested another night of mass twitter based beer shenanigans to discover the tasty and most likely hangover inducing delights of Barley Wines. At the time a mystery hash-tag of #BarleyCon13 was muted and then….nothing..

Since then, folks quite rightfully have badgered me to get this moving (or at least giving some gentle “get your arse in gear” type encouragement) but things have just been a bit mental of late.

The original hash-tag was hinting at an event I was trying to plan at Coniston Brewery which was going to possibly include a night over, the award-winning No9 Barley Wine on the bar and other beery delights too, hence BarleyCon. Sadly a bout of flu, seasonal B&B changes, an impromptu stag do then wedding and a Buxton Brewery launch at Euston Tap (here) got in the way. (It’s a hard life)

Maybe one to revisit next year though and book it all well in advance, anyone up for that?

Anyway, for now it’s time to throw the thing out there again before Spring takes hold, this time no bells and whistles just a date to start with and a few suggestions to get you going.

Saturday March 23rd is the date, time, whenever you feel like it. I’ll probably arrange a tasting session, maybe even an afternoon booze up that gradually decends into something lighter as things are definitely gonna get heavy.. 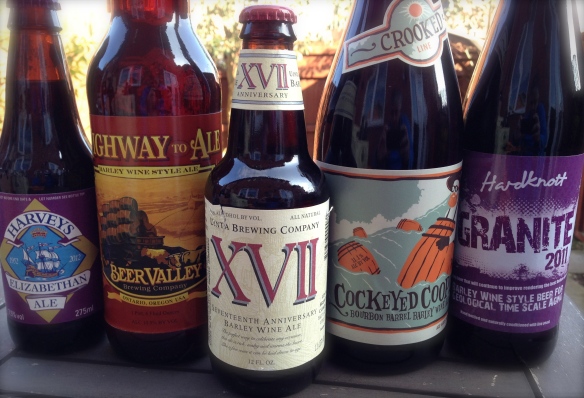 The hash-tag has changed too as the old one no longer makes any sense, I’ve gone for #AnyOldAle,  the inspiration coming from a post by Martyn Cornell on his blog Zythophile, where he explores the topic “So what IS the difference between barley wine and old ale?“. I also thought this would open the beer range up a little too, allowing folks to include variations on the theme, check out Martyn’s post for some ideas and explore away. 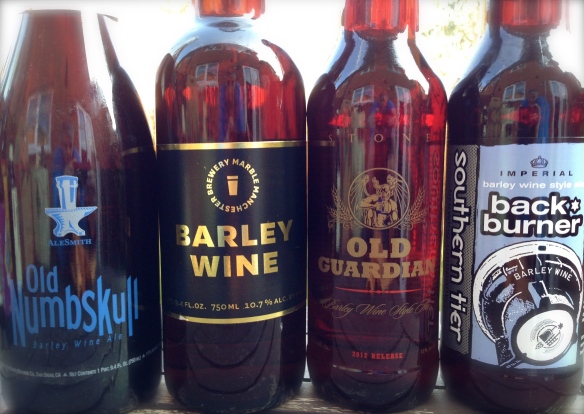 In terms of beers suggestions I’ve given a few hints in the attached photographs for starters. These are what I’ve amassed over the last year or so with a view to doing this sort of thing, some may not be available, although some of you will no doubt have the odd bottle tucked away.

Some I’ve tasted and would recommend, others will be surprises to me too, but that’s the joy of exploration.

There are a few others I’d look out for, not pictured here but should be slightly easier to bag in supermarkets and beer shops etc, these are Robinsons – Old Tom, Anchor – Old Foghorn, Arbor – Down Deeperer, Adnams – Tally-Ho or maybe Theakstons – Old Peculier as an old ale, not forgetting the odd Scotch Ale too if you’ve a mind to.

As always, I’m more than happy to help folks find some ideas or locate certain beers and welcome suggestions in comments which I’ll upload and will become a working list as time goes on as with #SupSaison etc.

Until then, happy drinking…

1 thought on “In a change to the advertised program.. #AnyOldAle”