Every boozy day out needs a good hearty breakfast and make no mistake, the Macclesfield Twissup will be VERY boozy.. So I had me an idea, (which happens from time to time) on how we could combine the two to make a most excellent start to the day.

Our first point of cal,l as you will see when I publish the map and timings, is going to be The Treacle Tap. If you have ever been there or to her sister bar The Young Pretender in Congleton you will already know about the range of award-winning pies both places serve and you will also know that they are incredibly good too.

I first met Neil Broomfield, the brilliance behind Great North Pie Co, at a beer and food matching event at the Young Pretender with the beers supplied by another Isosceles Twissup host Toby Mckenzie of Red Willow. He presented us with a steak pie made with Red Willow pale ale and I can easily say it was the best pie I’ve ever tasted.

Fast forward to my eureka moment…

Knowing that the Treacle Tap has a small kitchen and couldn’t really cook breakfast for the masses I thought “what about a breakfast pie?”. I ran the idea past Treacle Tap owners Bronwyn & Tim who quickly “warmed” to the idea (sorry) and spoke to Toby too, who in turn made the first contact with Neil, who after “filling” him in on the idea, like the man from Del Monte, he said yes..

The breakfast pie will feature among other things bacon and black pudding which makes it already a winner, plus two very interesting but very familiar, “mystery ingredients”… I know what they are and I’m bloody intrigued I can tell you, but I’ve tasted lots of Neil’s creations so I am confident it will be another delight for you guys to indulge in. Not forgetting the vegetarian folk out there, for them it will be a pie with a take on bubble & squeak.

I had another brain wave too… (Shocked? So was I)

It was at a recent meet the brewer event, funnily enough this time held at Treacle Tap, on this occasion it featured the beers and thoughts of Jay Krause of Quantum Brewery. 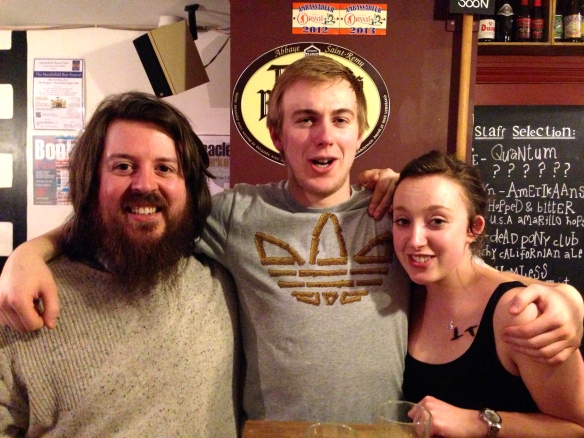 We had a brilliant night and Jay had brought a fantastic selection of beers, but being the awkward bar-steward that I am I didn’t want any of those, I wanted another “chefs special” especially with the breakfast pie idea in mind..

Cast your mind back nine months or so and those lucky of you to have been there, will remember a rather special beer festival, IndyManBeerCon. For that event Jay collaborated with North Tea Power to create a stunning pale ale made with blood orange tea.

It was a one off brew made especially for IndyMan, or was, as Jay has very kindly agreed to resurrect it and brew it for you lucky twissupers.

I’m rather hoping it will be a perfect pairing for the pie, but as I’ve not tasted it yet I can’t be sure. If nothing else you’ll get a nice “brew” for your breakfast.

So there’s your starting point, The Treacle Tap opening early for 11am, Saturday 29th June 2013.

See you there, cheers!