A rare visit to the blog for me, as you may have noticed I’ve been a little side-tracked of late, meaning writing has had to take a back seat. Maybe I’ll get more time to bash the keys more in 2016, who knows..

I normally have time to sit and ponder over this for hours (days), but as I’m trying to write this in between customer visits to Otter’s Tears, this one maybe brief and perhaps a tad hasty for someone who takes twenty minutes to decide what main meal to grab from a menu, then immediately regrets the choice as the order makes its way to the kitchen… (it wasn’t, see later)

Best UK Cask Beer: What an amazing year it has been for beer in the UK, so many great festivals, pub, bar and shop openings especially here in Stoke On Trent which makes me so proud. But one beer leapt immediately to mind as a read this first category, Yellow Belly Sundae from Buxton. Tried alongside keg and bottled versions of the original Yellow Belly at the stupendously good Omnipollo tap take-over at the Buxton Tap. Heaven..

Best UK Keg Beer: This one is an altogether much more difficult proposition, as a huge keg-head I’ve tried and forgotten a lot.. Yellow Belly again, Magic Rock “High Wire Grapefruit”, the Beavertown “Phantom” range at Birmingham Beer Bash, all brilliant and many many more.

But I think I’m sticking with Hawkshead’s delicious “Key Lime Tau”. If you are at an event like the Magic Rock Rainbow Project launch with such a ruinous choice of beer and choose to go back for more, something has just clicked. Matt, please make more, I’ll take a keg and many cases if you please..

Best UK Bottled Beer: Wow, a tricky one, especially in my new chosen profession. I love Weird Beard “Safeword”, Brew By Numbers 09/02 Brown ale and 01/02 Orange and Amarillo Saison, Blackjack have also excelled this year too as have Northern Monk with their seasonal specials. As I write the though, with one beer in mind from the outset, three more are beating the shit out of the very small decision-making area of my brain, screaming “ME! ME!” 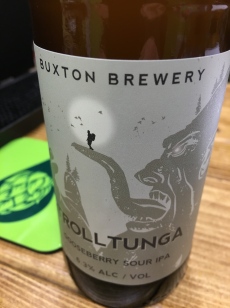 Best UK Canned Beer: Much easier, an absolute no brainer hands down. “Vocation – Life and Death”. This was the first beer I’d tried from Vocation earlier this year after picking it up in Brewtique Macclesfield. It totally blew me away, as has everything else I’ve tried from these guys. I’ve been lucky enough to get up to their hilltop brewery a few times late this year and gotten to know them, such a warm friendly bunch in a beautiful location. I also have to give a special mention to Magic Rock for their canned range, High Wire Grapefruit looks tastes and smells amazing, a beer that always makes me smile.

Best Overseas Draught: If this category means physically drank overseas, I’d have to go for Saison Dupont Dry Hopping I reckon as supped in Café Rose Red. Regardless, and it is a very difficult choice, but almost anything on the menu at the Omnipollo tap takeover as mentioned earlier. Without doubt the best one brewery line up event I can remember enjoying. So many incredibly good beers, with “Magic #4:21 Raspberry Smoothie I.P.A” nicking it from memory. Hats off to the Swedes…

Best Overseas Bottled Beer: Fresh in the memory, Immediately jumped in with Omnipollo again, for “Noa Pecan Mud Cake Stout”. Then…then I remembered my visit at last to Cantillon. Everything was delicious of course, but the “Zwanze Cuvée Florian” was a revelation. My only wish is that I’d tried more of the Zwanzie range, instead of hitting bottles of old favourites. Also ran, was the luxurious Calvados barrel St Bernardus Oak Aged Abt. A very close call indeed.

I think this is actually Fou’ Foune but hey..

Best Overseas Canned Beer: I’ve not had that many to be honest, at least that my muddled brain can recall. Oscar Blues “Ten FIDY” is always a firm favourite though, so err, that.

Best collaboration brew: This could easily go to either the Buxton/Omnipollo Yellow Belly, Hawkshead/Crooked Stave Key Lime Tau collaborations. But, a beer I have bought far to many times in recent weeks that ticks all the right boxes is the delightful “Trolltunga Gooseberry Sour IPA” by the hands of those reprobates at Buxton (who seem to be taking a starring role in proceedings) and Lervig Aktiebryggeri (Norway). A fruity, sour, tart, hoppy, sharp, funky, juicy, bottle of sherbet magic.

Best Overall Beer: Having copped out in the highest order on best UK bottled beer, I’ve now made it almost impossible to call this one without making that category meaningless. In truth though, any of those beers and indeed any of the other category winners could take the plaudits. I’m going to say though, and purely from the memories of gazing around the Buxton Taphouse at the looks of wonder in the eyes of those present, that an Omnipollo/Buxton winner is the only fair result. “Yellow Belly/Yellow Belly Sundae” with “Magic #4:21 Raspberry Smoothie I.P.A” biting their heels.

Best Branding: Sitting at the counter in my own beer shop should make this easy, instead the indecision demon in my head is having a field day. The minimalistic classy look of Brew By Numbers bottles I love, but I do find them tricky to distinguish, the same goes for Cloudwater, stunning look and feel, but tricky I think to pick out individual beers on a shelf although clearly both well worth doing so. Magic Rock cans look fantastic, as do the Mad Hatter bottles. I also delight in the inventiveness of Weird Beard, my favourite t-shirts too.

Sticking my neck out here though I’m going to say new kids on the block Vocation take this category. Their cans look and feel great, and are easily recognisable. Clean, bold and classy. Honourable mention to Northern Monk Brewing Co for the special edition range, I see so many people walk past and take a step back to look again, super branding.

Best Pump Clip: In the age of beer list boards, I rarely notice, for sheer beauty of logo design and backdrop, I’d say Cloudwater. Despite my earlier reservations about bottle identification, on a pump clip they really stand out well, drawing the eye from across a busy bar. I really must visit them soon, their merchandise is so cool too, the Tees at Indyman looked ace and I always want to buy a hat when I see them even though I never wear one! 😉

Best Bottle Label: As an individual label, the Mad Hatter “Sorachi Face Hugger” makes me chuckle every time I see it.

Best UK Brewery: Tough gig… Mad Hatter, whacky mad scientists producing beers that make you go WOW. Cloudwater, living up to the hype of that big build up in glorious style. Brew By Numbers, quietly getting on with it with superb range. Magic Rock, for just being Magic. Moor for making me want more. Buxton feature far too heavily in my list to not just nick it though, by an axe edge..

Best New Brewery Opening 2015: Has to be Cloudwater, producing some outstanding results in a brewery that is a thing of beauty, oh that NZ Hopfen Weisse is good.. Closely followed by Vocation, with a special shout out to the guys at Torrside too.

Pub/Bar of the Year: RedWillow bar in Macclesfield is a firm favourite. Magic Rock Tap & the Northern Monk Refractory too, I only wish I could visit either of them more often.

I’m incredibly happy though to be able to give this one to someone local. The HopInn in Newcastle Under Lyme has gone from strength to strength this year. Constantly in search of the UK’s finest beers and generally getting them. The recent addition of extra cask and keg lines increasing the beer offering to 14, not including your standard lager and cider type ranges. Old standards mix with craziest of craft, meaning there is something for everyone.

Martin and son Olly can often be seen out at the best bars actively “researching”, for no personal enjoyment, selflessly testing what is new and interesting to stock. 😉 The whole family and team at the pub though are all brilliant in truth, an absolute pleasure to drink there. (A special shout to Mark Coltman who’s not pictured, who regularly keeps me updated on what I am missing)

Beer Festival of the Year: Indyman Beer Convention & Birmingham Beer Bash, I flatly refuse to choose between them as both are superb events in slightly different ways and both are run by groups of people I both love and respect massively. Roll on 2016

Supermarket of the Year: Aldi, their bacon is fantastic

Independent Retailer of the Year: What a year it has been for the rise of the independents, not least here in Stoke where we now have BottleCraft – Hanley, Ten Green Bottles and The Hopwater Cellar in Newcastle Under Lyme, as well as my gaff Otters Tears in Burslem

Otter’s Tears has to win of course, “my gaff, my rules! 😉

Seriously though, Cotteridge Wines are hard to beat, their range is incredible and they are lovely guys. Beermoth is uber cool and I love to visit them whenever I venture to Manchester. I also have to give a huge shout out to the guys at Brewtique – Macc, Beer Emporium – Sandbach and The Bottle Lab in Leek who were all incredibly supportive while we set up our new venture.

Online Retailer of the Year: Rarely used any this year, usually Beermerchants if any, that said Eebria are doing really good things these days, so I’ll say those guys.

Best Beer Book or Magazine: “Hop & Barley” is a super professional publication, really glad I subscribed to them, and “Belgian Beer & Food” look after my yearnings for Belgium. I’d highly recommend both.

Best Beer Blog or Website: Beers Manchester and The Half Pint Gentleman keep me happy, “Boak & Bailey” and Matt Curtis are always coming up with something different too, lots of updated snippets that draw me in. In terms of a winner though the “Beer O’Clock Show” guys take it on one count for their podcast, always mega enthusiastic and interesting, big twitter presence, not forgetting the sheer hard work put into Big Beery Night. The other goes to my old mate John Clarke for his work on Dutch beer, “JC’S Beer Blog“ is the one I look out for in my inbox of late, mainly as I’m interested in the subject and John’s knowledge is exceptional. 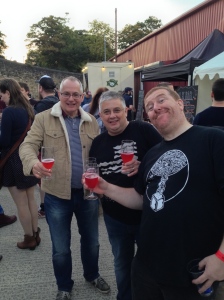 Simon Johnson Award for Best Beer Twitterer: David Bishop aka @broadfordbrewer and @twattybeerdoodles he’s clearly mental but oh do I love him! (in a manly hug sorta way). Special mention to my partner in crime @ckdsaddlers of course. 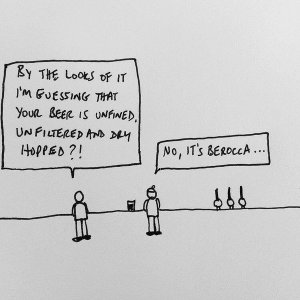 Best Brewery Website/Social media: Not something I tend to visit often, but I reckon Thornbridge, their website is clean easy, to navigate and always has some goodies in stock. Plus they are regulars to twitter as are the brewing team, lots of posts and interaction. Not really a brewery presence, but again both the “Beer O’Clock Show” and “Craft Beer Hour” have both brought new life to Twitter.

So that’s me done, completely failed to meet my deadline yesterday, so am finishing this at  midday on New Years Day, ah well, best get cracking on this years beers!

Cheers for reading and a Happy New Year to you all.