Think of your favourite beer festival, all that lovely beer just waiting to be poured, supped and savoured.

Think of the vast selection, the nibbles, even better, the pulled pork oozing from golden brioche buns. That ‘oh so” DIRTY burger, or that pizza, so screamingly hot but so irresistible you are unable to wait long enough to tuck in. Think of that bloody annoying cheese coated blister just behind your teeth as a result..

Then think again, think of it like this, an empty blank canvas.

Or even like this, the lightbulb moment, “ooooh I now, lets create a mahoosive beer festival right in the heart of one of Britain’s biggest cities”..

I recently signed up to help out at Birmingham Beer Bash or #bCubed as it is known in the Twittersphere. Mixing serving days with drinking days was always going to be tricky (and expensive) for me as I was already committed to Thursday and Saturday afternoon sessions beer sampling.

So I decided to go and help set up on Tuesday, right at the beginning, but of course that wasn’t really the beginning was it?

The pictures above were taken at around 11am on Tuesday morning (the rest at various points throughout the day), the venue having being open from around 8:30.

There were a few folk milling about when I finally made an appearance mid-morning. Eager volunteers ticking the few beers that had already arrived off lists, some creating more lists, gathering pump-clips, trying to look busy. Others were out and about, gathering bar equipment, BARS, furniture, stuff! The bits and bobs that they just know is going to be required at some point.

A large van literally packed to the ceiling with “stuff” turns up, is quickly unloaded and contents shifted to the back of the still echoing hall ready for distribution when the time is right.

It is starting to get busier now, suddenly there are no folk “milling”, all are rushing about, lugging this, dragging that, pushing the other. The mornings relaxed start now starting to be a worryingly distant memory, are there enough of us, there is a lot to do..?

Then the “Beaver-bar” ships up, it’s big, it’s complete, it is beautifully crafted but also very heavy. Fortunately it is on a pallet.

Unfortunately, it won’t fit through the doors as it is too high, but with a bit of twisting, turning, leaning and strained cajoling, she’s in… 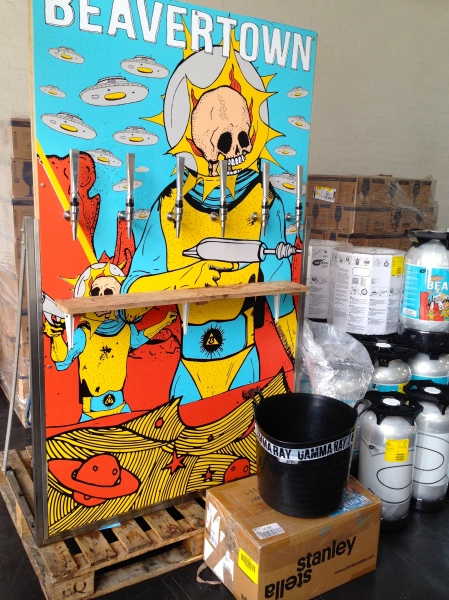 More bars arrive, the room is staring to take shape, time to take stock, have a breather and a quick but well earned sandwich.

In no time we are back at work, as fridges, cask stillages, chiller units, more bars, glasses and even MORE beer arrives and everything is checked off.

“Almost” everything that was due to arrive today, and a bit more, has done and now we have to make sense of it all. Bars are moved into place and made ready to go, spaces are left for those due back to help tomorrow. Stillages are set up and cooling fitted in readiness for casks. Time to organise beer! 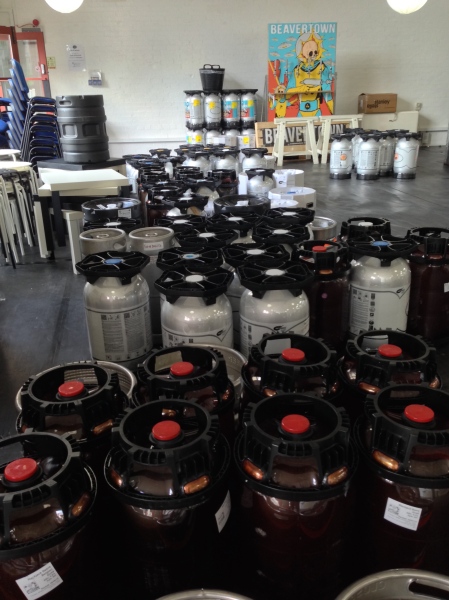 Casks are sorted and rolled around the room, a few laps apiece. Kegs are examined and placed in sections, lager, sours, international and everything else, then sifted and dragged into some sort of alphabetical order in readiness for the Wednesday crew. Things are starting to get heavy, as are my aching feet.

A pensive bar manager, what have I forgot?

Before we leave though, those casks need racking. Did I mention the heavy things and my aching feet?

Suddenly it’s almost 7PM and time for another breather as we wait for that one last elusive delivery, stuck somewhere in Birmingham traffic. Time for a beer or two from the fridge, handily placed there earlier by Mr Shipman, who’s brainchild this all is. No doubt from previous experiences knowing this would be required.

At last, at 7:30PM the day is done and we trundle wearily off to the Craven Arms for several glasses of well earned liquid refreshment.

Later, as I sat on the train home, completely knackered, I couldn’t stop thinking about the organised chaos I’d witnessed. I say chaos, but what I mean is, it was manic, it has to be, but everything had a place, each arrival was expected but also beyond control.

I also thought about me, I was tired yes, but I was a tiny cog in a massive wheel, I did one day. “ONE DAY”! Some of the volunteers were doing three to five, the Beer Bash crew will be doing it even longer as it all has to be taken down again and some of them have been working on this for a full year. All this doesn’t organise itself.

The festival of course was stunning as usual, the venue is great, the beer was great, the people are great, it was you guessed it GREAT! (Is this starting to grate?)

You can read a little more about how it all went here, via Simon at CAMRGB.

The next time you arrive at your favourite festival though, be that bCubed, Indy Man Beer Con, Craft Beer Rising, Leeds, Liverpool, GBBF, you name it, think about that beer lined room you rush eagerly into, beer list clutched excitedly in hand. Think about that room being completely empty, your footsteps echoing back at you as if in an empty church. Think about all the hard work that went into filling it up and the wonderful people like those behind Birmingham Beer Bash. Then rush to the bar and fill your boots!

A massive thanks to Dave and all the bCubed crew for all their hard work in making this wonderful beery extravaganza happen, you guys rock!

Tomorrow is a very special day for some very brave, committed and probably slightly bonkers friends of mine, for they have done something that I have longed to do.

Last year changed my perception of what a beer festival should be like forever.

Commencing with Hawkshead who were the first for me who had opted for the all-embracing approach of good beer served how the brewers intended, be that cask, keg or bottle. Mixed with fine food, a warm friendly atmosphere and surely the prettiest location. Then I visited the De Molen Borefts Festival which had the most eclectic mix of the worlds finest beers under one (two) roof/s I had ever experienced, it and was my first introduction to bitterballen. Finally we saw the birth of IndyMan who for me still hold the bar as the UK’s finest and in doing so have a lot to live up to themselves in 2013, a fact I’m sure they are relishing in trying to achieve.

But the competition is hotting up…

This year we’ve had similar events popping up all over the UK which is a great thing, I’m not against CAMRA festivals in any way you understand, but what I love about the likes of the above and Liverpool Craft Beer Expo for example is that the thinking is different, a fresh approach without the constraints of a rule book which needs a bloody good overhaul.

Enter stage left David Shipman or Otherton Ale Man as he is also known, father to Birmingham Beer Bash and leader of a fine body of folks of a similar mind. Reading back over Dave’s blog you can see how this has slowly come together after a lot of hard work, scary meetings and dedication.

Having recently organised a much lower key Twissup event in Macclesfield even without the massive finical implications of they have had to content with, I have some idea how he and all of the other organisers are feeling right now.

A mix of excitement, a screaming impatience and mostly, fear.

Will folks turn up, will the beer be ok, will anything go wrong and a thousand other little niggles and doubts will be swirling around heads tonight and I doubt a lot of sleeping will happen.

Knowing these guys though the fears will all fall away when the doors open and folks flood in. The beer list they have pulled together is impressive to say the least, again with no rulebook shackles imposed so as to bring something for every taste and opinion. There are side events of break out seminars and beer/food matching dinners etc too. Finally the guys have brought street food vendors of various cooking styles in house for those of you who’d prefer to munch as you go. Check the bookable sessions out here and here.

I have tickets for the Friday evening and Saturday afternoon sessions personally, so if you are about come and say hello, lets drink beer and support what promises to be a brilliant weekend of beer.

If you’ve not yet got tickets you need to act fast, some sessions are already sold out and you REALLY don’t want to miss this one. Tickets available here ->

Birmingham Beer Bashers, I salute you and wish you the very best of luck.