The problem with rating anything is that it is personally subjective, plus there are so many variable external influences that can, or could, influence the reviewers score or comments either consciously or unconsciously. Rating beer is no different.

The last drink you had, that bag of spicy Space Raiders you just ate, or the delicious cheese you are eating right now that just pairs so well.

Who brewed it, when did they brew it, how was it shipped, is it fresh, is it old, is it “meant” to be drunk fresh or is it better to save it until it is old, if so for how long, how long is too long?

Too bitter, too sweet, too hoppy, “hoppy, this isn’t hoppy”? Wow that’s strong, pfft too weak, way too much whisky barrel, it’s cloudy, that’s haze, too clear, I love unfiltered, this is boring, too brown, why is there fruit in here, can you taste phenolic sweetcorn?

What you just read on Untappd, Ratebeer, Beeradvocate and such?

Then there’s the actual rate, how do you rate, what is “good” for you, a three, a four, a FIVE, in that case what is exceptional?

Don’t get me wrong, I’m not knocking folks who rate, I personally use Untappd for example, and as such am at times (and definitely without any positive thought going into it), a certified “badge wanker”.. It was during such activity last night that these thoughts were pondered.

I don’t normally post comments, or at least anything worth reading tasting note wise, maybe an expression of delight or at worst a “meh”, but last night reading down some of the others below before I “tappd” I was a little bemused by some of the comments, so I did:

“Fucking hell there are some odd remarks about this beer on Untappd, it is ace, end of 😀 #justsaying” I said, exactly.

The beer in question being the Buxton-Evil Twin collaboration “Anglo Mania, described as an English Barley Wine.

What made me think that more than anything were the two comments on separate rates below.

“My rating is based on expectation of a smash English Barleywine. Way too hoppy. It’s more of an American Barleywine.”

“Love a good barleywine but I feel this could do with some big piney American hops.”

Then of course there’s the marking system, (if you use one). I do, but it’s hardly rocket science and probably changes several times a session depending on many things including alcohol and memory. It goes something like this.

3-4 Decent, rising through regular standard, I like sorta beer.

4.5. OOOOOH, really good, I could drink loads of this.

5. Fuckadoodledoo, call the registrar and arrange a special licence, I’m in love and we are gonna have ourselves a wedding. (I actually rated this as a five, it was probably only a 4.75, so put away that wedding dress Mr Stronge.)

But then of course others rates are totally different, as again was evident in a conversation with a good mate who I know, knows his beer. He (Rich) said “I gave it a 3.8 so it was quality”. On chatting he clearly loved it, but obviously has a different, perhaps more in-depth (or less haphazard) way of logging what he’s tried than I. Different strokes for different folks…

Then do you share your thoughts on social media, or keep them to yourselves? Personally speaking I rarely share these days apart from the odd one or two and of course the obligatory “badgewankery”. Some do though and at times I think for slightly unscrupulous reasons too on occasion.

The thing is, people do read these comments and can pre-judge by what has been said and/or for low or high scores. I know I have, especially if it relates to an unknown brewery or perhaps a particularly expensive beer, where I will have a quick peek at what people are saying before deciding on whether or not to buy. I’m not proud of it, and dread to think of how many really good beers I’ve passed by in doing so.

So, what’s in a rate, a personal opinion of a moment in time is all it is. So keep an open mind when you next read beer notes and be mindful of what you write.

Some folk absolutely love to do it alone at home or maybe out and about in absolute secrecy, hiding in shadows afraid of being discovered by a jealous partner.

Others prefer to do it groups, either privately gathered together in dimly lit rooms, or for the uninhibited, even in broad daylight the dirty swines!

My Mrs absolutely hates it and is always telling me to put it away. She says “I should stop playing with it all the time and taking pictures to show other people how good or bad it was”, “it makes you look like a geek” etc…..

Love it or loathe it, lots of us are doing it and I’m talking of course about using Untappd.

I started using Untappd late last year basically as a tool to log what I’ve tasted over the year as my memory is awful. I came to write up my Golden Pints and thought “I’ve been to some amazing places and drank copious amounts of superb beer, but I haven’t a clue what they were now”, after all, I’d slept since then.

Anyone who follows me on there knows that I don’t write much if anything, maybe the odd note or a thank you or whatever if the beer was from a friend. My rating system leaves a lot to be desired too, but again, I’m not losing any sleep over that either and would say only that you are and actually give a monkeys what I drink, then if I’ve marked it at 4 to five stars it’s probably worth a punt to being ace in my view.

What I have noticed though since I started to use the app or website, is that despite the published aim of Untappd above, I think at least personally I chat with people less about what I’m drinking now than I ever did before. Yes, if I post the beer I’m drinking via Untappd to Twitter or Facebook I do get the odd comment or sometimes a conversation commences as a result, maybe even a comment on Untappd itself, but nothing like it was in the days I first started using Twitter.

I’m not sure why this happens, maybe it’s because some people really hate Untappd and things like it and just switch off, maybe there is just too much of it now for folks to have time to winnow anything worth discussing from the chaff? Of course it could be that it’s just me that has noticed this phenomenon and you are all bored shitless of me wittering on about beer every day…

Don’t get me wrong here, I like Untappd (despite being labelled a geek) and will continue to use it, as for me it’s proving an invaluable tool to log my beer journey and I’m looking forward to revisiting all the info at the end of the year, but maybe I’ll post a bit less publicly via this and more directly in an old school stylee in an attempt to rekindle some lost friendships and contacts.

What’s your views on this, are you a lover or a hater? I’d love to hear of your experiences using Untappd and others like it?

#7point5 came about as a result of discussions revolving around several blog posts at the weekend and the previous week. These all referred specifically to the recent changes in beer duty which saw taxation increased by 25% on beers over the 7.5% abv threshold.

Several ideas were muted, including an online petition to the Treasury, writing to local MP’s amongst other things. We wanted though, something that could be used as an identifier on Twitter, Facebook and other social media when information was posted and after a few ideas were knocked about settled on #7point5.

Personally for me, the aim is to write an ongoing series of blogged reviews featuring higher strength beers from the UK and international breweries. They are not going to be full of moans and groans about the woes of beer taxation, unless of course that is the post relates to something specific along those lines.

However they hopefully will serve to highlight the fact that not every beer affected by the legislation is drunk solely for it’s high alcohol content, these are beers to savour like a lover of fine wine or malt whisky would.

If nothing else it should help dispel the misguided belief that after drinking an 8% beer, most people are not compelled in any way to go out and mug anybody, do a bit of looting, or sleep rough around the back of the “offie”.

So, as from today, anything that fit’s the bill from me will feature the #7point5 tag over the next few weeks, months or as long as..

Ultimately trying to raise a wider awareness of the change, the potential impact it will have and the real reasons behind it.

Hopefully enough people will get behind the force for a change back to a sensible level of duty across the board. To a level of taxation which is fair to all drinkers and supports the beer industry, not a duty levied on the false premise of stopping the antics of high strength lager swillers. 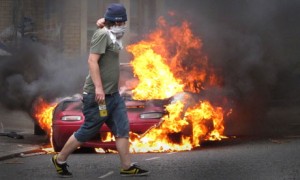 To that end I’d also like to invite/encourage any fellow beer bloggers to either write a guest piece for Beersay, or to write a piece on their own blogs under the same banner if that’s preferable.

Even if you are not set up to blog yourselves, but fancy having a go at a guest piece, feel free to contact me or leave a comment below.