“Eat, Drink and be Merry” whilst being watched by thousands of pious eyes… 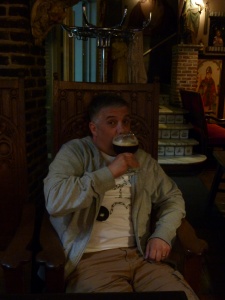 If not for being cast in plaster, hewn from wood or stone, the now static eyebrows would be raised in unison as if to say “back again are we”.

You trudge to the back of the room searching for a table, the smell of candles and musty old church halls permeating your nostrils. You decide to take the most ostentatious seats available, high-backed, with elaborate hand carved decorations and finials, chairs fit for a king or queen, not for drunken wretches like you or I, or so the owners of those unblinking faces seem to imply.

But then, THEN, you have the AUDACITY to order a St Bernardus Abt and drink it from a bloody chalice too!!!

Setting the visual and audio mismatch aside the menu at Het Elfde Gebod is decent enough and clearly is angled more towards a wider tourist audience rather than being a Mecca for beer aficionados. That said there was six draft beers including Abt12, Tripel Karmeliet and the ever-present De Koninck, and a bottle list featuring a mix of around sixty or more to tempt you, with plenty of Trappists and a small amount of Gueuze.

The food menu is reasonable too, described as “Plain Flemish cuisine with a contemporary twist”, however like most places we visited in Belgium this time around the food seemed very expensive with €18 to €23 seeming the norm for a nothing particularly special main course.

We opted for a plate of extremely quickly devoured bitterballen which I have to learn to make. They are absolutely perfect as a beer side snack and generally pretty cheap to buy.

Bitterballen is essentially a thick roux made with left over beef or other meats, it is left to go cold so it can be rolled into balls or croquette shaped logs and coated with breadcrumbs. They are then deep fried then served piping hot with a  side of what looks like a mixture of mustard and mayonnaise (it may well just be mustard). If sharing, the idea is to take a bitterballen, dip one half into the mustard, then pop the whole thing in the mouth, so no double dipping! You have to try these seriously.. 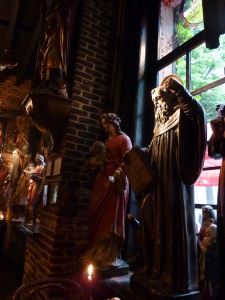 Back to the decor of this place, as you can see from the photographs there are hundreds maybe thousands of religious statues, images and various artefacts gracing every conceivable space in the bar, this continues up the stairs and into the second seating area on the first floor. It’s an incredible collection and draws the eye this way and that as you spot yet another “something new”. What puzzles me though is that choice of music beating away in the background, don’t get me wrong, it isn’t blaring and intrusive but why is it so?

Why would you go to so much trouble to decorate your building in such a fashion and then shatter the atmosphere it creates. Carefully adding the fact that I don’t sit at home with a Trappist

beer listening to “Now That’s What I Call Gregorian Chanting 26“, but something like that would just set the place off as background music. As it stands it sort of makes it all feel a little too manufactured, like a “traditional” Irish bar in Magaluf.

Maybe that’s a little harsh, and more likely that I’m just being a picky, grumpy old sod who needs something to complain about, each to their own and all that. It’s a nice bar and we went back for more so it can’t be all that bad can it, worth it alone for the St Bernardus and bittenballen.

Westvleteren, the myth, an enigma, some say the best beer in the world, consistently top of the hit parade in Ratebeer circles at least, but is it all hype?

Are our senses clouded by the cloak of mystery that surrounds the abbey and the notoriously difficult buying process for the drinker?

Last night i set out to find out…

The main purpose of this experiment was to prove to myself which was better Westvleteren 12 or St Bernardus Abt 12 which is reportedly one and the same thing, St Bernardus having once been the brewer of the other under licence back in the day (hence it’s inclusion albeit not actually a Trappist beer), this argument having raised it’s head on many occasions. I also wanted to throw a couple of others in the mix too, to make things interesting..

So I opted for another classic, Rochefort 10 itself an absolutely epic beer and finally, the new kid on the block Gregorius, the 8th official Trappist from the Monastery of Stift Engelszel, Austria, completed the line up.

I also wanted to strip away any preconceptions for the tasting, to make this as fair a battle as possible, so each beer was stored together and was served at exactly the same temperature. The chalices too although branded, were identical in form so as to be indistinguishable by touch alone. Then finally all four tasters were blindfolded..

So there we sat, scarves tied tightly around eyes, looking rather foolish I expect, well actually of course I know we did as photographs were taken as soon as we could no longer see, (how these did not end up on Twitter etc I do not know). On a serious note though it makes you feel really vulnerable, your other senses working overtime to compensate for the loss of sight, but the beer itself stripped bare to aroma and taste alone. 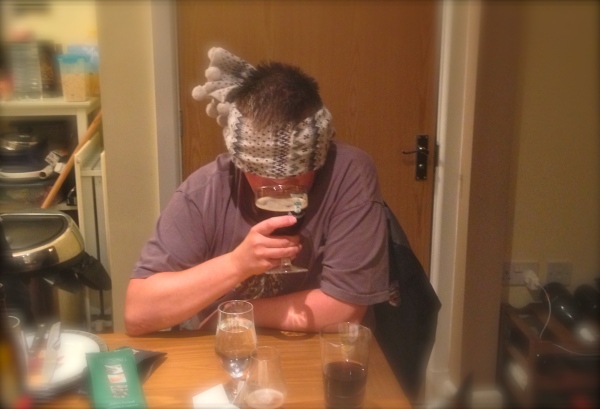 Tasting session or firing squad, you decide? On second thoughts…

Each beer was passed by our “official servers” one at a time from taster to taster on the first pass, with a refresher of water in between, the order of course being changed from the original table layout and documented by the keeper of scores. We all then had a second chance to taste each one directly after the other and to revisit any again before making our individual decisions, our mission not to try and identify which was which, but simply to rate them one to four or best to worst.

We ranked in order of merit and I’ve scored them as such, top beer choice scoring four points and the bottom one, the results being as follows

It was a really weird experience actually, much more difficult than I thought it would be and although the results around the table show a clear winner we certainly weren’t all in agreement in terms of favourites. Two judges had an identical orders for example with the other two having first and third place in complete opposites.

The one that surprised or maybe dissapointed me personally most tasting this way was St Bernardus. I buy it regularly and really enjoy it, but in this short experiment at least it failed to impress. Gregorius too was a tricky one, it never got out of the bottom two across the board, I thought it tasted a little harsh to be honest, a friend described it as raw and maybe that’s a good assessment, one to revisit.

Clearly the Rochefort and Westie were closest of all with the latter just edging it for me in terms of flavour and aroma hit, but not by much.

So what does this prove?

Bugger all really, it’s answered a few questions in my mind and for others around the table too. It’s not proved that Westie deserves its revered position as the best in the world only the best in my kitchen on a cold October evening…

Imagine you are out late at night after a heavy fall of soft fluffy white snow, all around you is glistening white bathed in bright moonlight. You close your eyes and listen…

Nothing, the world around you is silent, the sense of tranquility is so tangibly strong you can almost taste it, that silence…..

“Trappist Beer – Taste The Silence” the strap line of Café Rose Red, I like that, it sort of sums up what you should feel when drinking an authentic monastic beer, all quiet and reflective. Not that Rose Red is like that, there’s no vow of silence to make when you enter please be assured, although there is a certain ambience about the place that could induce long bouts of silent pondering over chalices full to the brim with dark frothy headed beer.

See what I mean? St Bernardus Abt12 on tap, definitely worth a few hours pondering…

Café Rose Red is a beautiful little bar situated just off the main tourist trail, but still only a stones throw from the market square. There is a warm welcoming feel to the place as you enter the main bar area which is brimming with character, a happy place, somewhere that cares about your overall experience, a safe haven from the bustling tourist hot spots.

The beer list is plentiful, not enormously humongous compared to some, but at around 120 it is more than adequate, with something to suit all tastes on the menu. As you can imagine there is a strong emphasis on Trappist beer and I got my second chance at drinking St Bernardus Abt12 on tap, a much more enjoyable experience than my earlier encounter with it at the Monasterium.

Sadly we only found Rose Red on our second night which is a real shame as it’s gone straight into my top three places to visit in wonderful Bruges, sitting the esteemed company of Brugs Beertje and Staminee De Garre.

To get more detail visit the website here, or you can visit the Rose Red blog here.

I’ve also found out whilst searching for links that there is also a small hotel that is attached to Rose Red called Hotel Cordoeanier. I’m not sure if the two are owned by the same people but they do offer packages which include drinks and food at the café bar amongst other things, it looks a cool place to stay too.