This is my 300th post, a bit of a milestone for me and long overdue. Much in beer has changed since I first sat down and decided to start blogging under the Beersay handle around five or six years ago..

Brewdog opened their first bar in Aberdeen sometime during my first year in blogging proper. My own first visit to a new-fangled “craft beer” bar came I think a year or so later when I walked through the doors of Mr Foley’s in Leeds.

Mr Foley’s rapid rise to fame came largely in my view at least, as a result of the vision of it’s then manager Dean Pugh. His potential quickly spotted, @BrewDogBarDean as he is now known, became manager at Brewdog Manchester, before helping to establish the brands UK flagship 40-tap bar in Shepherds Bush. Then bringing the timeline bang up to date. Only a few weeks ago, Dean packed his bags and moved to Berlin, and he’s not just going over to watch better football.

Although saying that, currently the only team doing “wurst” than his is my own.

In that time of course Brewdog’s massive expansion has been mirrored by a huge rise facial growths of the beardy variety, many other things grown too, breweries, bars, beer columns in the press, full-on “quality” beer publications, podcasts, twitter beer shows, blogs and more.

Beer Festivals are no longer purely the domain of brown, there is a now veritable rainbow of colour choice, cloudy is acceptable and if a beer is sour, it won’t necessarily always mean “it’s off, sorry I’m sending it back”.

The once awful catchphrase uttered by a landlord, “here’s a fruit based drink for your good lady” doesn’t have to mean he’s being sexist, but only if he’s just handed you a bourbon barrel aged imperial apricot and mango saison. If not, he’s still a twat.

Beer is on TV, hooray! OK it still needs work and will get better, but it’s getting there.

Loads of the beer writers that inspired me to write also have moved on. Some have written books, become beer sommeliers, taken jobs in breweries, STARTED breweries, launched enormously successful beer festivals, opened bars, shops etc. Some have done pretty much all of the above.

Personally speaking I certainly don’t write as much now as I once did and there are many reasons for that. So many more folk doing it better than I do being one that immediately springs to mind. But that is a good thing too, as clearly with more being written by more people, beers popularity has risen enough to enthuse more people to be passionate about it in whatever fashion they see fit.

I definitely get a buzz about it still, especially when folk comment or say that I have inspired them in some way, or even if they just tell me I’ve written a complete load of tosh, as at least I know they bothered to take time out to read it.

If nothing else, I have made so many new and good friends over the years, not just drinking buddies, people I truly class as long-term close friends, people I trust and can (and do) confide in, go to for help and get it, help back, have a moan at or with, or just plain have a laugh and get drunk next to. Inspirational people in some way all of them.

But the times they are a changing, as old Bobby Dylan once scribbled: and I have exciting news. Things are about to change for me too

Things are about to get otter, but I’ll tell you more about that in a day or so..

I’ve been up against it today time wise, so apologies that this is a little later than planned. Below is basically a rough timetable for the day, but as always nothing is carved in stone, especially this year. So expect a leisurely wander, to great places with lovely folk, drinking ace beer.

All timings are approximate and all beers listed as being on are subject to change; as beer sometimes can be unpredictable. This is a quick rundown, a snapshot if you will, of some of the beverages that await you…

Our first stop, Treacle Tap is easy to find. Walking out of Macclesfield train station, turn left down the bank onto Sunderland Street (No 43), the bar is 2 minutes walk and is on the right hand side, walking away from the station as you look at it.

Brewtique – Bottle Bar and Taphouse 11AM – 11PM (all day) then general wanderings from RWB roughly 19:00 onwards

To confirm this is not a ticketed event, anyone can come along. It would be great if you can join us for the whole day, but if not you should find us in the vicinity of the venues at the above times. Share the love using the #MaccToBasics hashtag on twitter, have fun.

See you at 11am in The Treacle Tap, I have a hot date with a breakfast pie..

As with previous events, one of the highlights of any Twissup is the brewery visit. It’s a chance to chill out, have wander around the brewery, ask stupid questions, point, poke and sniff things.

RedWillow are welcoming us all again, giving old and new a sneak preview of the new huge brewhouse, which is rapidly progressing to being operational (ish).

We have a few treats for you here, including the unofficial mini-launch of Faithless XLV, a New Zealand Hopped Brett IPA, which sounds WONDERFUL! Hopefully Faithless 44 Dry Hopped Pilsner and we think either Directionless or Wreckless (tbc). 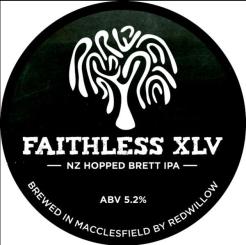 I am also reliably informed that Toby is bringing along his BBQ, which was described as being “like a spaceship”! The man himself will be manning the flight deck and burning things for your delight (maybe Smokeless would have been a good idea), no other men (or women) of course will be allowed to touch or even look even slightly lovingly at the BBQ, as it is like being unfaithful, please bear this in mind as you approach..

Olly Clarke from Freedom Brewery will be with us and is hoping to bring along a few samples of their new IPL, plus a few other bits to hand out as samples, (assuming he is still able to speak and has control of his limbs at this point). Don’t hang about though as neither will last long..

Down at RedWillow Bar later in the day, a suitably well stuffed beer menu will await you. Including fresh on for the day, two of my all time favourite beers, Roosters gorgeous “Baby Faced Assassin” and Salopian’s delightful “Kashmir”, plus Mikkeller’s “Crooked Moon DIPA” which sounds dangerously good.

RedWillow Bar will also have “Fearless” T-shirts for sale on the bar, priced at £15 each, but sadly will not serving food as it is just too busy to make this practical on a day like this, however if you have the munchies, do have snacks, plus there are plenty of takeaways nearby.

I’ve written this in a bit of a rush, so hope I haven’t missed anything (shout up if I have). A full run down of the route and timings will be up later at around 6pm.

Please share, tell your friends, come along and enjoy what is normal a fantastic day of beer!