I have exciting news for those of you who are joining us in Macclesfield on Saturday 29th June 2013. (note: crap subliminal message stating the date for your diary)

We got ourselves a Twissup collaboration brew! Yes, it’s been confirmed tonight that it’s definitely a goer and we have three exceptional brewers getting together to create a beer for your very own drinking pleasure.

Being brewed at Red Willow sometime soon, Toby Mckenzie will be joined by Jay Krause, head brewer at Quantum and Colin Stronge, formerly of Marble, Black Isle and now head brewer at Buxton Brewery. Can anyone smell hops?

So what’s the plan?

Well first of all it’s going to involve this…

Speaking exclusively to Mr Stronge this evening, I can now reveal some of the “finer details” and I quote:

“Turn up, mash in, get drunk, trash Toby’s hop store” and “see how we can “cough” lighten his hop load”..

That sounds an absolutely marvellous plan to me, what do you think people?

Wow time flies when you’re having fun. It doesn’t seem like five minutes since I was busy booking trains for the Buxton Brewery assault on the Euston Tap and here we are a few days after the event and it’s all done and dusted…(sad face)

What a great event it was though and well worth the trip, the place was rammed to the rafters with beer lovers eager to sample the Buxton range and of course a first taste of the new kid on the block Wyoming Sheep Ranch.

We had a great day touring the sights beforehand too, Borough Market early doors to stock up the old bread basket, Kernel Brewery because it’s sacrilege not to visit there if you are in London on a Saturday morning. Plus a new highlight for me (and you too if you know what’s good for you) a visit to Partizan Brewing which is literally a five-minute walk from Kernel, each sitting not in competition, but more of a complimentary fashion to the other in the emerging microcosm of beer and foodie hipster-land of the Bermondsey arches. As my good mate Chris Dixon has documented the day here in fine fashion I won’t go into it further, but give it a read and keep an eye on Beer Drinkage for future posts.

Back to the tap the beers from Buxton were on absolutely banging form, I’d go as far as saying most were the best I’d ever had from the Peak Districts finest hop rustlers. As highlights the Wild Boar was phenomenal, so fresh and juicy I really could have drunk that all afternoon.

Axe Edge of course was predictably stunning, I’ve waffled on about its excellence on many occasions and even tried to blend it too, but on Saturday it was better.. Don’t ask me why, fresher maybe, tweaked recipe, the occasion, I don’t know, but trust me it rocked!

I was at this point I hoped to review Wyoming Sheep Ranch, I tasted it on the day and can confirm it’s another class act, but took no notes as I had a bottle tucked safely in my bag for home so I thought I’d be able to give it more thought there. In a random act of kindness though, I gave it away to a chap I was told afterwards apparently owns/runs Dean Swift, his bottle had disappeared and as I live locally, I thought it would be far easier for me to acquire another bottle than he, so I shared the love and he went away a happier chap.

From what I remember it was more of a meatier beast than Axe Edge, by that I’m not inferring it contained traces of Shergar… I mean it was more full-bodied, having a nice thick malt character, plus hoppy as hell with loads of flavours going on including a big old slab of fresh pineapple. Hopefully it won’t be long before I get to try another bottle so watch this space, or better still try it yourself and let me know what you think.

Thanks to everyone who made the day what it was, especially the guys from Buxton and the Euston Tap as without their hard work and hospitality I’d have no doubt been asleep on the sofa instead of having a superb day out drinking a fine selection of beers with good  friends.

A massive thanks to The Evening Brews too for the photographs, as I stupidly neglected that task on the day..

Mixology, beer alchemy, what ever you want to call it is something I’ve liked to do for a while really, even before I really got seriously into beer. I suppose it started from trying to make a pretty mediocre beer taste better, you must have been there when nothing available tastes that great and you start to look around to see “what can I use to make this bilge drinkable”?

This blend though does not fit into that last category in any way shape or form and in fact I got the idea for this little gem from JK, the head brewer of Buxton Brewery himself. I remember reading his twitter entry which I’m pretty sure was under the hash tag #melangecarnage and thinking WOW, that sounds fantastic, a modern day black and tan with added hop explosion.

So today as the Mrs is away I thought why not recreate it myself in glorious blognicolour for your pleasure. (Just to be clear, I’m taking no pleasure personally in this experimental beer chemistry, it’s all for YOU)

The first ingredient is Axe Edge, Buxton’s Double IPA which I am reliably informed is losing it’s DIPA moniker very soon, to

be replaced with something more befitting the title in ABV. (Jeez if this happens its gonna be good)

Make no bones about it though Axe Edge is EPIC.

It was one of THE best beers I tasted last year (and I had a few) and is always in my beer cupboard as long as supllies allow. An absolute hop tsunami of tropical fruit on the nose, mango, grapefruit and orange, this follows through in the taste but without any crippling bitterness that some IPA’s have, think smooth and mellow. I remembered beer writer Zak Avery describing it as being “ruinously drinkable”, basically inferring that you could easily keep quaffing this, but to your ultimate peril. (see video review later on) 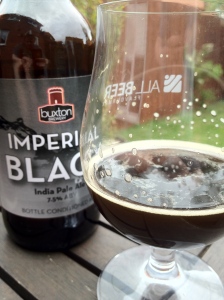 The other partner in this crime of beer passion is Buxton Imperial Black IPA, Axe Edge’s dark side if you like but with a black heart and an even higher ABV at 7.5%. The aroma for this one is very different indeed but still gives the full on, in-your-face hop dominance I’ve come to expect from Buxton Breweries beer. Think Mike Tyson crossed with the Incredible Hulk. Underneath it’s smooth but just as dark and dangerous, flavours of bitter dark chocolate and espresso coffee dominate, but have to fight it out with pithy sweet citrus fruits and bramble berries.

So what of the Melange I hear you cry?

Well first off can I please express my sincere apologies for the absolute fail on the black and tan pour front. I researched how to pour it correctly, but failed… I couldn’t have failed in more epic proportions had the instructions said “pour both bottles into a food processor and turn dial to high”. (I blame not having one of those bendy spoons)

The result though if you shut your eyes is MUCH better. Use your nose and strangely a lot of the big fresh fruit bowl hit has gone, being replaced by more of a malted chocolate aroma, imagine a late night chocolate malt drink but with a metallic peppery hop nip to it. If anything this is a negative mark for the melange as the other two singly smell fantastic.

On taste though is where this works so very well, the balance just sort of, works.

It’s slightly sweet but with a bitter edge, imagine the flesh of a really juicy orange, pop it in your mouth with a hunk of top quality dark chocolate, let the chocolate melt and the flavours merge and you are half way there. It’s just sooo drinkable, if Axe Edge alone was ruinously drinkable this is a potential mass murderer. Considering you have a 6.8% and 7.5% beer in your glass you would never believe it in a million years, a murky dark destroyer.

To summarise I suppose the question remains as to why would you bother to mix two perfectly excellent beers together, when they can stand alone equally well, head held high on your virtual beer shelf, it makes no sense?

To answer that I would simply say, because you can. After all where would we be if folks had never experimented, nothing is perfect, actually I might think about making a flying machine next?